A 4,000-foot-high mountainside released approximately 120 million metric tons of rock in 60 seconds during a landslide onto the Lamplugh Glacier in Glacier Bay National Park and Preserve. In an interview with the Alaska Dispatch News, geophysicist Colin Stark of Columbia University's Lamont-Doherty Earth Observatory, described the slide as “exceptionally large.” He compared the massive landslide to roughly 60 million medium SUVs tumbling down a mountainside.

Mountainsides that were held strong by the heavy ice of glaciers become weak when the glaciers retreat. Erosion along with earthquakes are triggers that can cause the weakened slopes to collapse.

The slide occurred on the morning of June 28 in a remote area of Glacier Bay National Park in southeast Alaska. It was first observed by Paul Swanstrom, pilot and owner of Haines-based Mountain Flying Service. Swanstrom noticed a huge cloud of dust over the Lamplugh Glacier during a flightseeing tour of Glacier Bay National Park several hours after the slide occurred. Swanstrom estimates the debris field to be 6.5 miles long, and one to two miles in width.

Even two days later, as this aerial photo of the Lamplugh Glacier landslide shows, a dust cloud remained over the unstable mountainside due to still tumbling rock. 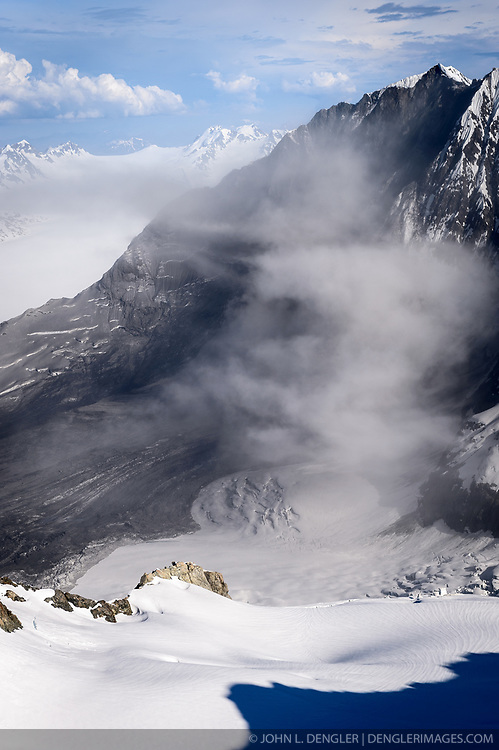